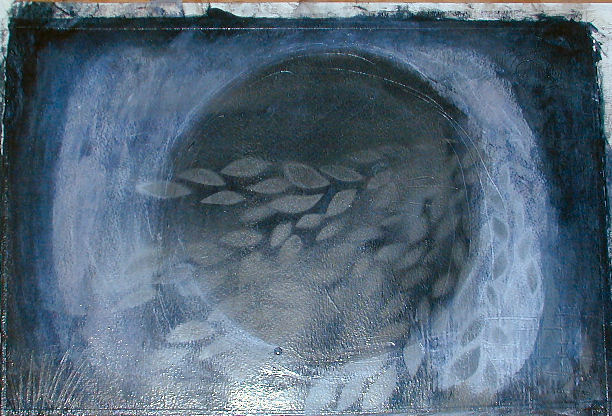 I've been working on this painting for a few days.  Made some progress today but have stalled a bit at this stage.  I think what it needs now is words but I am of two minds on this one.  Despair vs religion.  Originally it was to be a  painting about the black hole of despair but the charcoal leaves kind of sent it in another direction.  Here is the same painting in a brown scheme (graphic programs rock).  Looks almost like an xray. 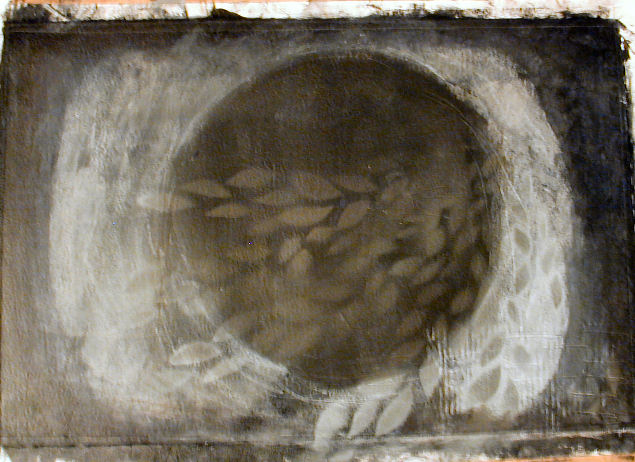 From a distance (i.e., looking at thumbnails) the painting looks like an eye peering out which of course takes it in another entirely different direction.  Seems fitting since I am trying to resolve a visual aura I have had since 2001.  Visit to a new neurologist today (old one moved away) and found out that I am a sort of well known case study (not me personally, just my visual aura).  Kind of weird but I suppose there is some immortality in that.  My visual aura is different from my migraine aura - it is on all the time - lots of static and swirlies and twirlies and green blob floating through occasionally with something playing in it and a giant folding on itself grid that shows up when I turn the lights off at night (the grid framework is blue - who knows?) after all the twinkly lights pop out.  Seems to be no apparent reason for it.  Have had a billion tests (closer to 30-40).  Drew a photo for him of my migraine aura and apparently it is a classic fortification illusion.  Well, there's something normal about me at last :-)  Hooray!

Off to meditate - hopefully will be working on my GPS entry tomorrow if time permits. Happy Giraffe!  Belinda
Posted by Belinda at 2:37 PM