The Halloween party was a big success, the costumes were done and looked great, the spiders on the lawn were creepy and then we all got sick!  Oh well!  I do not have photos of the costumes - we plan to get dressed up and have a photo session but will wait until everyone is well.  Our main photographer of the family was off in Texas attending a funeral and the photos that were taken were not very good.  Certainly not blog worthy.  I am finally feeling better myself so am posting not one but two entries today!  WooHoo!  So all I have to offer from Halloween are the giant lawn spiders - Enjoy!  Hope your Thanksgiving is great no matter what or with whom you are spending it and no matter what you might be eating (I'll be having turkey with all the fixin's - yum)!  Happy Giraffes always!  Belinda 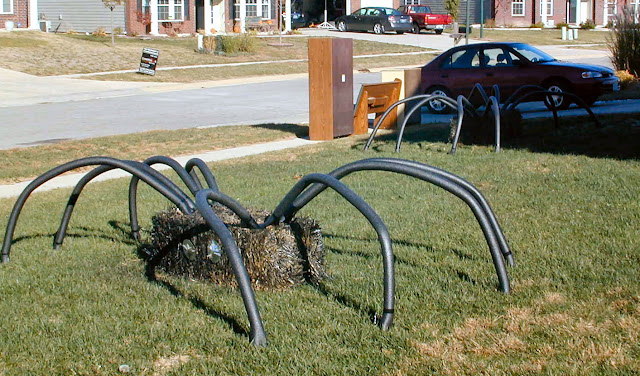 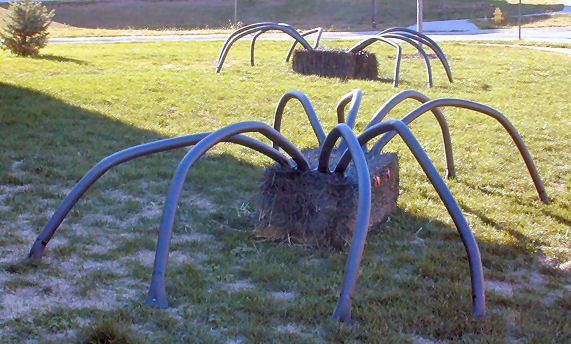 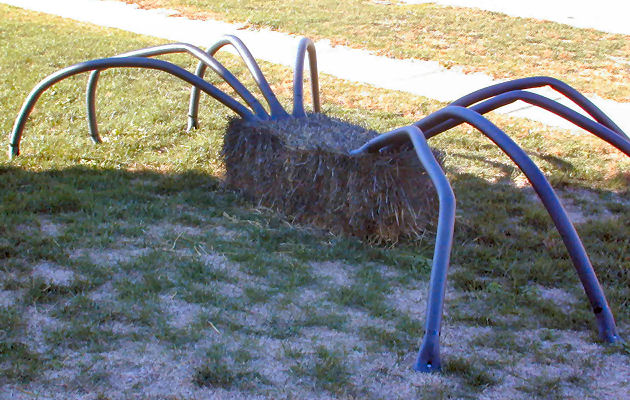 We used hay bales and painted them black for the bodies.  We used pipe insulation for the legs and rather large bolts to attach the legs to the ground and the hay bale - we also put wire inside the legs so they could be posed very creepily!  They held up very well despite a rather stiff wind.  I bought the supplies (my sister got the hay bales) and my nephews (ages 16 & 17) put them together on the lawn (one wired the legs, the other secured them in place and my niece (14) supervised.  One of the spiders had motion activated reflectors for eyes - very creepy in the dark!  And the other one had cds - very shiny but not as creepy (an idea we had later was to break up the cds and stick them to tape so it looked more like spider eyes - will tuck that away for next year!).  These were especially creepy at night with the street lights and moon shining on them - although the trick-or-treaters were not fazed in the slightest - GIVE US CANDY!  Heehee.  I hate spiders but these are easy to kill - just pull off the legs and store in the garage and give the hay bale to someone with chickens!  Happy Belated Halloween!
Posted by Belinda at 7:05 PM