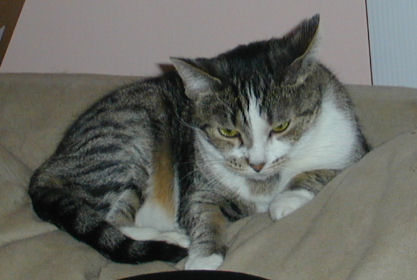 16 years ago in the spring, a stray cat who we named Buttons showed up at my house and gave birth to a litter of kittens under a shrub in my front yard.  Given that the weather was not great at that time and the danger to the kittens from other cats, we moved Buttons and the kittens into the garage [I had a pretty fierce cat inside at the time and was afraid she might harm them if we moved them into the house].  I found homes for most of the kittens and we were rounding up the unadopted ones to go to a shelter.  However, there was one we could not catch.  She ran so fast and was so smart - she eluded all of us!  So she stayed at the house.  In the morning when I left for work, I would let her out and at night she slept in the garage.  She had plenty of food and freedom.  In August I attended a conference and my mom took care of my indoor kitties; she also brought leftover chicken and befriended the stray.  The only name the kitty ever came to was "Hey Girl" so that became her name.  After a while of living outside, she started coming in the house and then wanting to leave, come in, go out, etc.  After a week or two of this, I told her she had to pick one - in or out.  Being a very smart cat, she chose inside.

Hey Girl was not a friendly cat.  She was independent and she wasn't fond of being held or even getting too close to anyone.  Only 7 people have ever seen her.  She was a master of hiding - she once got out into the garage from the house and successfully hid for a full week - we tore the garage apart looking for her and never did find her hiding spot!  We left the door to the garage ajar one night and she finally came back into the house.  Hey Girl discovered that she liked being scratched and petted but you had to move slowly and carefully or she would spook and whoosh, she was gone.  She gradually came to trust me and would come and sit on the bed and let me pet her.  Recently she even let me use both hands to give her a good body scratch.  When I was laying in bed and she wanted to be petted, she would come up and tap me with her paw 2 times on the arm and step back.  When I didn't respond, she would do it again more insistently.  She rarely meowed and I only know of two instances where she purred.   One of my longtime hopes for Hey Girl was that she would one day trust me enough to let me hold her.  Or that she might actually sleep beside me.  The last three days she did both, but only the sleeping beside me was really her choice.  I had to hold her to give her medicine and to say goodbye.

She had the biggest green eyes and a reddish nose.  She had a spot on her chest that was too colors and kind of heart shaped.  Her ears always seemed too big for head.  She was salted but had an amazing pattern to her coat which was so soft.  She was super smart - you could point to her, point to a planned route of approach, she would look at you, look at the route and then she got it!  This came in handy when there were treats to be handed out and the other cats got in the way.  She loved cheese.  It was her favorite food.  She loved chicken and turkey too.  But crinkle the cheese wrapper and she was there!

She started losing weight a few weeks ago and it became very noticeable very quickly.  I took her to the vet last Monday and she stayed all week.  She had kidney failure which the vet thought might be caused by infection.  They treated with antibiotics.  She didn't eat much at the vet.  She developed a cold.  I visited her several hours every day and we played and cuddled and had some wonderful quality time.  I brushed her and told her all the things I wanted her to know.  She came home on Saturday and quickly acclimated back to home.  But she was too weak to get on the bed so I set up some steps for her.  I tried everything to get her to eat - KFC, deli turkey, tuna, every kind of canned cat food, even stupid stuff like baby food.  She ate a little turkey and a little chicken but not much.  She mostly drank water.  Sleeping was difficult because of the cold.  She would start to relax and then her head would bob.  She did sleep for a few hours last night while sleeping beside me.

Today we went back to the vet and talked about treatments and options.  He said that even though the kidneys had improved somewhat, they would continue to worsen and he was concerned that she had tumors in the kidneys because they had not gone down in size (the antibiotic should have reduced the infection by then).  Her life expectancy with treatment would be about 6 months.  Treatment would include feeding tube, surgery, lots of medication, subcutaneous fluid injections, blood work, needle kidney biopsy, perhaps a visit to a specialist if she had kidney cancer, then more treatment if she did.  For a cat who spent her life doing what she wanted and being so independent, it sounded so terrible and not what she would have wanted.  She could have 6 more months of agony or she could be at peace today.

It is the most difficult decision a pet owner ever has to make.  We want our pets to stay with us - we don't care what the cost will be or the time or energy or effort it will take, we want them to stay.  But we have to be their voice - we have to choose for them.  We have to ask ourselves deep down what kind of life - what quality of life is not enough.  At what point does the cure or treatment become worse than letting them go.  We have to be compassionate and humane.  It's so f*^&ing hard because all you want is to hold them a little while longer; keep them safe and with you forever.  You can't tell them the pain and the discomfort and the groping, pinching, poking and holding is for their own good.  All you can do is tell them you love them, you are so glad they have been a part of your life, that they are the most important thing to you.  That God only knows how much pain and suffering you as their owner and friend are enduring to make the right choice.  And then you have to make the right choice.

And today I made that choice for my dear, sweet, precious kitty and I hate it and I miss her and I wish cats lived as long as we do.  And I see her with my daddy and with cinder kitty in my heart.  She is running so fast and hiding in the tall grass and chasing butterflies and happy.
Posted by Belinda at 4:53 PM