Missing photos can be found at: BeautyIncognita Picasa Album

I wanted to make a tiny angel to hang from my rear view mirror and had sort of a feeling for what I wanted it to look like. I did a quick drawing and then sewed one up. It didn't have exactly the feeling I was looking for so I sewed another one leaving the opening for turning and stuffing on the other side. I ended up really loving both of the shapes. The first one already had a name, Hymn, and it came together pretty quickly. I used some bark paper (not sure of the actual name) and dyed it with Dynaflow and then fused some angelina to put behind the bark. I played with placement of both the angelina and bark and when I was happy, I tacked it down really well with some gold beads. I love beads! The hair was some off white hair I got in a package which I also dyed with the dynaflow (love Dynaflow too!). The wings were an accident - I was playing with my wig jig trying to make spirals when I thought that might be a good way to add wings to Hymn. He has a nice feeling to him.


I had originally painted the other angel blue but was playing with some Textive and made a really cool wrap and wings so ended up painting over the blue with Claret (dynaflow again). I left a tiny bit of blue showing on the b`ottom back where the wrap exposes the body a little bit. The hair is silk fiber I purchased at Beads Unlimited (about 5 minutes walking distance from me!). I wrapped it around my fingers and glued the bottom of it down and then took some magenta thread and multi color beads and tacked it all over to give it a nice shape. I named this one Solace.

Now I am not sure which one is going to end up in my car - I have another item I may hang in there and just place Hymn and Solace in special places in my house. 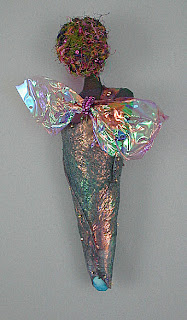 Later this week I will post a photo of some textiva beads I made. Very cool and sparkly! Happy giraffe! B 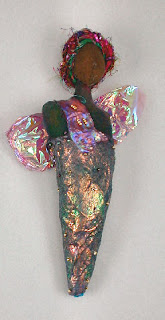