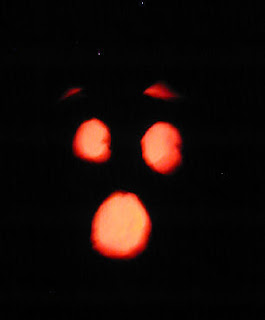 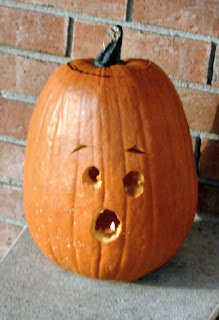 Happy Belated Halloween! I am happy to say my thumb is on the mend. I had a fun Halloween this year. One of the few years I was actually off work for the holiday. I work a funny schedule - Sunday through Thursday - so not always able to be home to hand out candy. We had a big crowd this year - the variety of costumes was impressive. I dressed up to hand out candy - wore a blonde bob wig (left over from madonna karoke - a long story) and dark angel costume. Bought some pretty impressive black patent boots from ebay this year to wear with my costume - 5" heels and very goth looking. Always wanted a pair of goth boots. Surprising how easy it is to get used to wearing heels after not wearing them for so long. Anyway, had a great time and gave away all my candy!

Have been thinking a lot lately about firsts. When we are young we have a ton of firsts - first steps, first words, first boyfriend/girlfriend, etc. Seems to me like we get to a certain point in our lives and we stop thinking about firsts. SO I have decided to start focusing on firsts and this Halloween season I did 2 things which I had never done before. This year I went to an actual pumpkin farm to get my pumpkin (first time in a long time that I have actually gotten a pumpkin for halloween). The farm was way out in the country and it was a rainy, blustery changeable day. I had to drive to Bloomington to pick up my cool new boots and on the way back I saw a sign for a pumpkin patch and couldn't resist! The field was muddy but when I got there the sun was out. They had little red wagons to take with you out to the field (so cute). Some families used the wagons to cart children into the field. The pumpkins were scattered everywhere - it was kind of late in the season so most of the pumpkins nearest the barn were pretty picked over but the farther out in the field you went, the more spots of orange appeared. I found several wonderful pumpkins that weighed more than I could lift but finally I found a pumpkin just the right size. 18 lbs. I had so much fun taking my little red wagon all over the field, the wind whipping my hair all over the place, my shoes getting muddy but the sun lifting my spirits. Great day! Good first.

I brought my pumpkin home and wanted to give him a name - I thought a nice name that began with p would be good - like Percy Pumpkin or Perrry Pumpkin or Peter Pumpkin (peter, peter, pumpkin eater) - but the pumpkin insisted on being named Fred. Fred the pumpkin took up residence in my kitchen for the week before Halloween. I wanted to get to know Fred and find out what kind of face he would like. I drew a face for him that was supposed to look like he was frightened. I was feeling kind of frightened myself because I had never actually carved a pumpkin before - there always seemed to be a boyfriend or a brother around who would take over and do it. I bought, on the advice of my sister in law Lisa, a proper pumpkin carving kit and followed the instructions to carve Fred. Went very well I am happy to say and next year hope to do something more complicated. The photos above were taken on Fred's big day, Halloween. He sat on my porch and greated all the trick and treaters early in the evening and then came inside and sat on a stool where I kept him lighted all night long. He didn't last long - halloween pumpkins never do - but I think I might see him again next year or maybe one of his brothers!

Definitely recommend pumpkin fields and carving your own pumpkin. In a couple of days, I will post some photos of my beach vacation and tell you all about it - it was wonderful! HG - Belinda
Posted by Belinda at 6:11 PM